Adzooma BlogThe Marketing World‘I Save At Least a Day a Week Using Adzooma’: The Story of a Business Owner

That’s exactly what was going through the mind of Joshua Ivars Medina when he was combing through his ad campaigns three months ago.

Joshua started in paid marketing in 2012. “Back then I could set up campaigns and within one or two weeks they’d be primed and I’d barely have to touch them.”

But paid marketing has come a long way since then. As it expanded in it’s complexity, the hours spent going back and forth into Google, Microsoft and Facebook has only grown.

“That former scenario would be a dream now,” Joshua continued. “Now you have to refine and optimise so often. PPC has changed so much.”

In the 8 years since Joshua started in paid marketing, he’s become an all round marketing expert and is now the Founder & CEO of La Tienda Del Apicultor, an ecommerce business based in Spain that specialise in high-quality beekeeping equipment.

Back in November, as he looked to start scaling his business and campaigns, he turned to Adzooma. And at the end of January he spoke to us about what his journey’s been like so far. 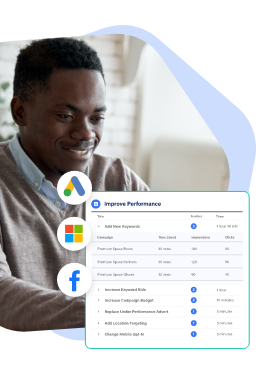 Optimise your paid advertising for FREE

Our award-winning platform helps you boost profitability on Google, Facebook, and Microsoft ads.

Start Now – It’s FREE!
Table of Contents
“Without Adzooma, we would have to do this process manually”
Microsoft Advertising has “been super useful, I’m really surprised”
“I save at least a day a week using Adzooma”

“Without Adzooma, we would have to do this process manually”

“We have PPC experts in house,” Joshua explained when discussing his business. “But if there is something that we can’t solve or we have a big project that will take months and months of work, we will look to an agency. That was until I found Adzooma.

“I took a look at Adzooma because I thought it could save us time. We needed to build campaigns for other countries like France, Portugal, Germany and Italy, and to replicate these campaigns with our resources, on top of the tasks that we currently have would have taken months of work. But Adzooma has made this really easy to replicate. Without Adzooma, we would have to do this process manually.”

It’s something we’ve worked hard on at Adzooma, making campaign creation so easy. We know that using Google, Microsoft and Facebook Ads’ native networks can be fiddly and clunky so we made sure our interface went through rigorous user testing to make it super clean and easy to use – something we’ve come to expect from a SAAS platform in 2021.

“Adzooma is really helpful for us especially as it’s really easy to set location targeting up and to optimise it. It’s super cool and clear.”

“I mostly use Adzooma for the Management and the Reporting, because they’re really useful and I think all the reports we are served with are great.

“However, thanks to Adzooma I also started to use Microsoft Advertising too. Honestly, I used to think it was a waste of time because they have such a small share, but with Adzooma, because it’s so quick and easy to build campaigns, I thought I’d give it a go and it’s been super useful, I’m really surprised.”

That is one of the things with Microsoft Advertising. It does have this reputation for being small and ineffective, yet it’s audience is still vast:

Plus, it’s far from ineffective. At the start of January 2021 we did a study comparing the conversions, clicks and cost of Microsoft vs Google ad campaigns and the results were pretty interesting.

And, exclusively with Adzooma, you can get $125 in Microsoft ad credits for just $25 when you sign up for a new Microsoft Advertising account.

Then, you can sign up to Adzooma for free, connect your Google and Microsoft accounts, and manage both accounts in one platform so you never have to hop between the two.

The best of both worlds.

“I save at least a day a week using Adzooma”

“Me and the team used to spend two or three days a week going through creating and optimising campaigns, but now that’s been stripped back to one day because of the software,” says Joshua.

“I use the time to test new ad copy and work on ad creatives now I don’t have to work on the manual side of the business. It allows us to focus on things that bring more value. I save at least a day a week using Adzooma.”

That’s one of the great things about being able to ditch the manual work. Having time to work on the creative and strategic side of the business, which can bring so much business value.

That isn’t always easy. So in a collaborative study with the University of Cambridge in December 2020 we took a deep dive into finding out how to improve your landing page and your content strategy. They’re two articles you should really have a scout over if you’re looking to take your campaigns to the next level.

Another thing that will take your campaigns to the next level is us implementing the feedback you give us – that’s why we love speaking to our customers for pieces like this, the freelancer Phil Bacon and the PPC agency owner Phil Byrne.

“It would be great to have Google Shopping campaigns,” said Joshua when we asked him what he’d like to see added to Adzooma. “It’s such a big driver of traffic for us and if it could solve us the same amount of time that the rest of the platform does, that would be great.

At least, while Joshua waits, he can work on the strategic side of his business rather than repetitive paid marketing work.

The smarter way to
manage your ads.

“Having used other tools previously (Wordstream & Optmyzr) I can say that Adzooma is far better value and actually helps you to deliver so much more for your accounts.”

“Amazing tool, the functionalities are excellent and it saves lots of time in maintaining multiple ad accounts. Looking forward to making this my go-to ad management tool.”

Ready to raise your brand profile and authority? Write for us on our blog.

Ready to raise your brand profile and authority?

Ready to grow your business

Get the latest industry news and discussion from our expert team

Network with like-minded business owners and exchange tips and advice

Learn the best Adzooma tricks and techniques from product specialists

Find out about new features as soon as they’re released

Looking For More From Your PPC Campaigns?

See how Adzooma’s AI technology can get the most out of your Google, Facebook and Microsoft Ads with our free trial.